Anchoring out and sailing in the fog

We've been meaning to spend a night at anchor for a long time - Valentine's Day seemed like a nice excuse to do that, and when I got a call from my friend Nate suggesting that Amanda and I join him and his girlfriend, it seemed like a perfect weekend.
I'm starting to feel fairly familiar with our little part of the Bay, so when we headed out on Sunday afternoon with 10 knots of breeze and unseasonably warm weather, I felt like we were heading into a fun, but pretty mellow outing. And, when I got a call from Nate saying that they'd decided to pick up a mooring ball at Angel Island rather than actually setting an anchor, I was even more convinced that this'd be a breeze, so to speak. 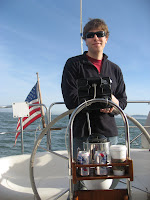 It was late afternoon by the time Amanda and I rafted up with Nate and his girlfriend Liz on the south west side of the mooring cove. The water was calm, and rafting up next to Nate's boat wasn't hard at all - Amanda did a great job at the helm, bringing us perfectly abeam without any excitement. Our only other experience rafting up had been with Curt and Allison, and while that day was still relatively calm, I was surprised by how much more mellow the whole experience was the second time around - just the little chop we'd had that first time made all the difference, and the stillness in the Angel Island cove made dropping the lifelines and walking between boats feel incredibly relaxing compared to doing so in the middle of the Bay.
Nate and Liz made salmon and veggies - we brought appetizers, and before too many glasses of wine, I was feeling like the mellower side of sailing wasn't so bad...

We had a quiet night, and when I crawled out of bed the next morning, it felt dead calm - almost calmer than it usually is when we're in the slip. I opened the companionway, stepped out in the cockpit and saw that we were surrounded by fog in all directions. The boats moored 50 feet away were visible, but only just. The boats I'd remembered seeing the night before 100 feet away had either left early or vanished in the fog. I was pretty sure it was the latter.
Honestly, in retrospect, I think this was probably the point that I should have started worrying, at least just a little... But, we had coffee brewing, eggs on the stove, and the fog brought back memories of driving through Carmel with my mom when I was a boy. It struck me as more beautiful than hazardous.
We finished breakfast and said goodbye to Nate and Liz as we untied from Nate's boat and sorted out who's docklines and fenders were who's. I had the day off (President's Day), but Amanda had to work, and it never occurred to me that we shouldn't leave in time to get her there. I think for some reason I still hadn't really considered what it'd be like to be in the middle of the Bay with 50 feet of visibility.
I did, however, have the presence of mind to turn on the radar, and get out the handheld GPS before we headed out, and as Amanda tried her best to steer a compass course, I split time between staring at the instruments and straining my eyes to try and see much of anything beyond our bow.
The level of confidence that I was putting into our radar hit me full force as we got ready to cross the shipping channel on the east side of the island. I started remembering all the sunny days that we'd had and how much fun it'd been to sail next to that channel and see just how busy it was. The memories were suddenly seeming much less pleasant when I started thinking about how BIG those boats are and how fast they can move.
Then, through the fog we heard a ship's horn.
I should add that the day was dead calm (as it almost always is when it's that foggy), and the sound travels over water incredibly well on a day like that. It felt like what I assumed was an aircraft carrier was bearing down from about 100 yards. We exchanged glances... "this is a little stressful" Amanda pointed out. It was hard to disagree.
It took me a little while to really get the hang of using the instruments. The GPS is set as north up rather than course up - a little oversight that caused me to actually head us into and parallel with the channel rather than perpendicular to it... it also took me a little while to get the hang of the way the images on the radar move when the boat moves (minor course corrections at the helm made it feel like suddenly everything was heading RIGHT FOR US). But, after about 30 minutes, I was starting to feel pretty confident. Amanda was steering us well, and the radar really seemed to work. I was pretty glad that we'd turned it on a few times before on clearer days. 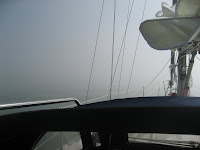 About half a mile away from the Berkeley Pier, the fog lifted enough so that we could make out the boats around us that I'd been spotting on the radar. It was pretty gratifying to realize how accurately I'd been able to read it, and VERY relieving to realize that one of the ships horns we'd been listening to with a little apprehension belonged to a ship that was at least a mile away.
I felt pretty proud of the job we'd done, and pleased at our ability to stay relatively calm in what had become a pretty tense situation. I was also struck by how true it is that we learn a little something (and often a big something) almost EVERY time we head out - even when we're just expecting a mellow trip to Angel Island.
I was also starting to feel just a little bit like we were coming into our own - I now have a pretty strongly held opinion on the importance of radar (at least in the SF Bay), and it's gratifying to have come to that opinion through hands on experience rather than web based research.
Amanda even made it to work on time...
Posted by Amanda and Krister at 10:28 PM No comments:

Yay! We finally have our sails back! Sunday brought dry weather and light winds- what an opportunity for a quick trip to try out the new sails. We headed south under the Bay bridge, toward the city, passed the ball field and then turned back. I was chilly and still getting over a cough so Krister practiced single handing while I cuddled under a down sleeping bag in the cockpit. 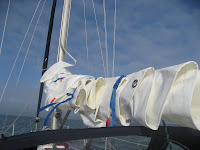 Our new main, so crisp and white, has three reef points, lazy jacks and is made of heavier sail cloth. 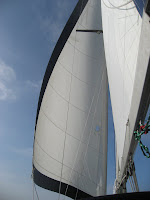 Our 135 genoa was refinished with pretty blue edge to protect it from UV rays while furled. 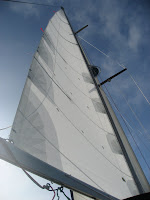 Beautiful! We gain almost 2 knots with the new main- feeling fast and safe. 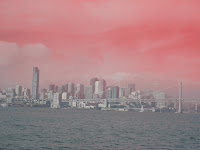 San Francisco and the Bay Bridge
Posted by Amanda and Krister at 12:04 AM No comments:

We had a couple visitors in January, my mom and older sister Jessica. Our sails weren't back from Doyle yet and it was just as well because a big rain storm hit while they were in town. Not a good time for a sail- California had record rains, even thunder and lightening. It was nice to listen to while we played Boggle and Rummy, drank tea and talked. I was disappointed that they didn't get to enjoy any sunshine hanging out in the cockpit or experience Britannia out on the Bay, but it was great to show them the boat and spend time together below deck. 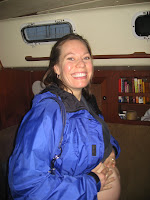 My big sister Jessica and baby #5 stop by for games and lunch. 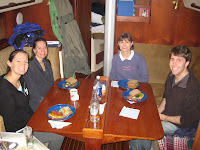 All sitting around the newly refinished table enjoying soup and sandwiches.
Posted by Amanda and Krister at 11:42 PM No comments: