The passage of cascading failures and the wrong wind

From Tonga to New Zealand

Maybe we should have taken the signs more seriously. I mean, sailors as a group are superstitious, and we are sailors now...
Two days before our crew, Joe, arrived I was on deck enjoying my lunch and I casually looked over at the port shroud I was sitting next to and noticed that 2 strands of the cable had corroded and popped out of the swadge. OH shit. Krister and Lauren from Piko spent the next few hours rigging a suitable patch. 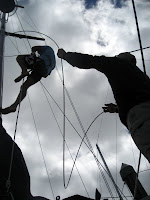 Fixing the shroud in the Opua marina

Then there were the little things; the weather window didn't look great, the angel in the head fell onto the floor (after 10 months of sailing I was surprised and thought it odd). It was pouring rain so we took advantage of the chance to fill our water tanks before leaving. Unfortunately as we attempted to fill the tea kettle from the deck water, its lid went over board.
The morning we were to leave, the galley sink burst, flooding the floor. Joe and Krister ran out to the hardware store, and re-plumbed the drain with a concoction of 4200 (that's boat glue). It didn't feel right, but as I watched Piko sail away from us, a sinking feeling came over me. We were one of the last boats left in Vavau, and the last of our friend's boats was leaving...

So we left too... (Yes, we win the lemming award) We had wind right on the nose (to the non-sailor that means a rough ride and lots of water over the deck and in the cockpit) and Britannia handled it better than her crew. It was the first time I actually got sick from sea sickness. It wasn't Joe's first time, but even with the Dramamine he still lost his lunch. Then we discovered that Britannia's bilge isn't what it should be... and then there was water everywhere.

The bilge float switch, being underwater decided it would be a good time to fail. So at a 35 degree heel Krister pulled up the soggy floor boards (which caused the veneer to separate from the board) and replaced the butt splice and re-wired it. Good thing he's a fast fixer. Joe was bailing water down the drain and I was on the emergency hand pump. (We're still drying things out a week later) After that I thought it would be nice not to be on such a severe heel so we reefed down to our third reef point, but somehow in the the process our mainsail tore. Bummer.

The next day, still splashing and bashing I smelled something aweful and toxic. What could it be?! We had to evacuate the cabin before we got too light headed. We each took turns going below, turning on fans airing things out and looking for the source. Finally we pulled up another floor board and saw red. Like a slaughter- there were blobs of red floating and stuck all over the bilge. Apparently the red engine spray paint can had corroded in the previous day's saltwater flood and exploded out of reach behind our starboard water tank.

Then finally one night, the wind died. Piko was within VHF range and called to say they were going to motor through it; strong westerlies were forecasted and it would behoove us all to make landfall before they showed up. So we fired up the iron sail... 8 minutes later there was a chuck-chug and she died. Some how water had gotten into the fuel line. Uh-oh... We drained over a quart of water off the fuel filter and went for the hail mary play; the one where you throttle up and pray she starts again. And she did! 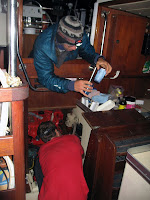 Draining water from the fuel filter underway in the night

At some point our main cooking sauce pan went over board- making anything more than a one pot meal impossible to cook. Good thing we like ramen noodles! We also discovered that the auto pilot steering to the wind loses control when we key the mic for the VHF radio. Funny we never noticed it before. The flag halyard came down with our radar reflector. Our tri-color mast-head navigation light went out. But through it all, the crew remained pretty positive. Joe said, "I heard there's always something broken on boats, I thought that's how sailing was..." and "You guys weren't freaking out so I figured we were okay." It's true, we were never in real danger, just uncomfortable, wet and on bit on edge. 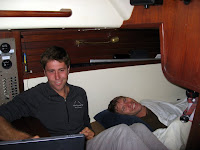 The crew in good spirits 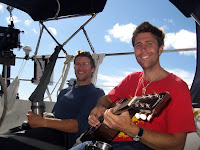 Krister and Joe enjoying the sunshine and calm

Always keep in mind that everything ends eventually. I was on watch 2 am- 6am; about 60 miles out when I first caught the scent of sweet clover- ahhh land. The sun rise was so beautiful I almost cried! It was so good, that it was worth waking Krister after only 2 hours of sleep. The wind died and we motored the last 20 miles into port. Dolphins accompanied us, Krister's family called on the handheld radio to welcome us as they watched us come in and things just kept getting better...

Sunrise before landfall in New Zealand

For those cruisers wondering, the customs and agriculture agents were fairly efficient, and they took all the things they said they would... beans, sprouts, honey, wild rice, and fresh foods. Joe helped out by eating most of it before they came aboard... carrots and popcorn for breakfast? Great!

So we made it! Safe in the slip, with all the fresh water we want, hot showers a short walk up the dock, a fully stocked chandlery, shops in town, and our friends right next door. We celebrated with a huge Thanksgiving feast. After months of food variety deprivation, it was everything I hoped it could be... corn on the cob, green bean casserole, mashed potatoes, salad, stuffing, gravy, cranberry jelly, chicken (no turkey would fit into the boat ovens), apple tart, pumpkin pie, chocolate balls... and wine! Thanks to Rick & Janus, the crews of Piko, Shalimar, Architeuthis, Krujeli. 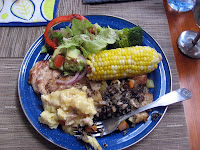 Thanksgiving on Piko
Posted by Amanda and Krister at 5:31 PM